Actor Vijay Deverakonda and actress Ananya Pandey attended the fourth episode of Karan Johar’s chat show Koffee With Karan. Actually, both these stars are going to be seen together in the film Liger. This is the reason that both of them came to Karan’s show to promote their film. During the show, Karan Johar, as usual, asked his guest’s many funny questions. Ananya Pandey is only 23 years old but has had a relationship with 2 men

These days, the matter of the nude photoshoots of Ranveer Singh is heating up on social media. In such a situation, Karan also asked Vijay whether he would do it or not if he got a chance to do a nude photoshoot for an international magazine. 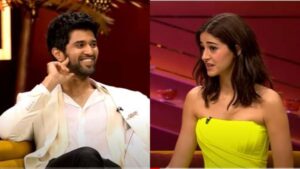 Karan asked Vijay in the rapid-fire round, ‘Will you do a nude photoshoot for an international magazine?’ In response to this question, Vijay said, ‘If he shoots well, then he has no problem with it. Vijay Deverakonda wore slippers worth only this much at the trailer launch of the film Liger

After this, Karan’s needle turned towards Ananya Pandey and he asked her to do you wanted to see Vijay Deverakonda nude. In response to this question, Ananya said, ‘I have seen her a little bit nude in Liger but who would not want to see her.’

Actually, a poster of Liger’s film has shown Vijay Deverakonda nude. He has put only a bouquet of flowers in front of him in the photo. Let us tell you that the film ‘Liger’, made under the direction of Puri Jagannadh, is being released in theaters on August 25. South superstars are debuting in Bollywood films with this film. In such a situation, this film is considered very important for Vijay’s career.